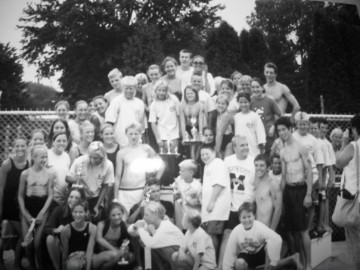 The story of The Woodland Club really starts in 1928 when D.J Meese decided to build a tennis court at the rear of his home at 591 Woodland Road. A former potato patch yielded to drainage tile, a gravel base, and yellow clay. Backstops were constructed from 1 1/2 inch OD iron pipe and wire mesh, known then as chicken wire. Some of the early tennis players, besides Mr. Meese, were Don Glendinning (one of Ohio's pioneer aviators), Bob Simon (who became well-known in Hollywood as a supporting actor), Ben Goodenough, Harvey Bailey, Henry Huston, George Gaalaas, Harold Burns, Merrill Manz, Jr., Elmer Eckert, and Harry and Jack Berno, a pair of premier tennis players from the Cleveland area who were connected in some way with The Davey Steel Co., now known as AK Steel.

A Club was formed in the early 1930s and became known as The Woodlawn Tennis Club. Dues were $5.00 for the season, generating sufficient capital to maintain the court with some help from the members, particularly in the spring, and child labor available in the neighborhood for 10¢ per hour. An annual Club Tournament, as well as an annual City Tournament, were major events at The Woodlawn Club which enjoyed the reputation of being the best court in town, superior to Kingwood and Westbrook which had inadequate space behind the baselines. Sizable crowds lined Woodland Road with parked cars to take in the City Tournament.

In the late 1930s the original members, many of whom had passed from the scene, were joined by Thornton Moore, Lowell Bourns, Charlie Nail, Ruhland Isaly, Frank Gadfield, Watty Slabaugh, Sam Campbell and Andy Zoll. Bob Enos and Bob Spear were a fine doubles team, Lefty Bob Keefe was a singles champion, and a few youngsters like Lars Larson, Bob Meese, Gene Rudolph, Peter Knight, Lewis, Jerry and Bettina Mollica showed some promise.

By 1940 The Woodlawn Tennis Club was outgrowing the facility at 591 Woodland Road, and its members started to envision a larger tennis and swimming facility to serve a larger family membership. Charlie Nail and Ruhland Isaly had saved up a few dollars and purchased the lots. on Andover Road, now occupied by The Woodland Club, in anticipation of building a new facility. Plans for this development were based in part upon the Akron University Club, of which Watty Slabaugh was a member. However, the plans were put on hold while World War II was pursued to its conclusion in 1945.

Following World War II interest in the establishment of a new Woodland Club was rekindled. Plans for the development were com­pleted by architect Herbert S. "Tubby" Jones. A unique (at the time) and a very successful plan to finance the project was con­ceived. 152 interested people, designated for posterity as "Charter Members" (see attached listing) agreed to purchase a $300., 20-year, callable, debenture bond bearing interest at the rate of 4% per annum. A few of the Charter Members pur­chased more than one bond, or in a denomination of more than $300., in order to raise a total capitalization of approximat­ely $50,000. For the first 20 years of the Club's operation, the annual budget (see attached copy of the 1954-55 budgets) included interest payments to bondholders as well as suffic­ient funds to redeem bonds at a rate which resulted in all bonds having been retired before the end of 20 years. It should be noted that a few bondholders generously returned the redemp­tion proceeds to the Club while other bondholders with young families hoped each year that their bond would be called and re­deemed.

1948 was the year of construction. Charlie Nail and Ruhland Isaly sold the land to the Club for what they had paid for it several years earlier. The original plan called for three yel­low clay tennis courts on the East side of the property, a 25-yard pool with low and high diving boards, a baby pool, separ­ate men's and women's bathhouses, and a family recreation area on the West side of the property which included shuffleboard, swings, merry-go-round, teeter-totter, basketball backboard, and a picnic area. Many individual members furnished common labor to the project. Architect Jones, Builder Frank Gadfield, and earth-moving contractor G.B. Herring (whose supervising en­gineer on the project was Bob Preston) had major roles in the project. Bob Preston has some tall tales about a swamp, or spring, under the present location of the pool into which he almost lost some heavy equipment. By late summer 1948, the membership was enjoying the courts, pools and recreation area.

While the basic design of the Club has changed little, a number of improvements are evident. The growing interest in tennis in the '50s and '60s led to the replacement of the recreation area on the West side of the Club with, first one, and then a second an all-weather court. The original diving boards were declared un­safe and the pool was considerably deepened for safety and to accommodate the competitive diving program of the Greater Mans­field Aquatic Conference. The yellow clay courts were replaced with Har Tru (Fast Dry) surfaces, a project which was supervised by Hal Schaus, one of the finest tennis players ever developed on The Woodland Club courts, and completely renewed in May 1990, under the direction of President Sam Van Cura. A deep well was put down to provide a water supply, independent of city services, for the pool and for an automatic sprinkler system for the Har Tru courts. The two bathhouses were joined by a carpeted deck. New roof construction over the bathhouses solved a roof leak problem and provided storage space for Club equipment. Without exception, the Club has been maintained in a creditable manner under the watchful eyes of the Trustees, Officers, and a Club Manager.

The pool program at the Club has always included swimming in­struction for all ages, a Red Cross approved water safety pro­gram, and plenty of chairs and lounges for sunning and, gossip­ing. Prior to the development of the Greater Mansfield Aquatic Conference competitive program, a major event of every summer was the Water Ballet (see attached copy of the ''nautical News''). This Eleanor Williams inspired event was a-consuming interest for many of our teen-age gals. With the birth of the GMAC, fom­petetive swimming became the consuming interest, culminating in the GMAC championships held in the· latter part of July. It is an unwritten rule of the Club that family vacations may not commence until after the GMACs and the utilization of the pool and the courts provide ample evidence that this rule is care­fully observed.

In the 50s and 60s interest in tennis was growing rapidly and, in Mansfield, it was happening at The Woodland Club.  A competitive Club Tournament and the News-Journal City Tournament were annual events. The Club's active interest in young play­ers led to the development of Torn Bloor, Bud Sorenson, Billy Reale, Fritz Haring, Phil Ford, Hal Schaus, Donnie Monk, Gor­die Smith, Jerry Lorentz, and more recently Bud Vetter and John Beathler.  With the establishment of Lakewood Racquet Club by Jerry Lorentz, the development of young players gradually shifted from The Woodland Club to The Lakewood Club where Ron Schaub continues to sponsor a fine program for young players.

One of the highlights of the early Woodland Club years was the Annual Invitational Doubles Tournament which brought to Mans­field some of the finest amateur tennis talents in the upper Midwest. This was tennis at its best, and a pleasant expeii­ence for the participants, their families, and their hosts. It should be noted that the Woodland Club entries always acquitted themselves well.  With each year the membership of the Club changes somewhat, and a new Board of Trustees and Officers take charge.· However, the basic character of the Club does not change. The Woodland Club intends to provide a well-maintained facility where members may enjoy quality tennis and swim programs with just enough social interaction to make it fun, not a burden.

ADDENDUM: The Woodland Club story would be incomplete without recognition of the role played by Watson Ellsworth Slabaugh in the conception, planning, financing, development and execution of the project. Watty can no longer make his presence known on the tennis court, and at Board meetings, as he did from 1940 until 1985. However, his effective leadership will always be remembered as the essential ingredient in making The Woodland Club what it is today and, hopefully, will be tomorrow.

Charter Members of The Woodland Club